Overweight brings with it a multitude of associated disorders. Some of them are related to the musculoskeletal or digestive systems. Others have to do with the cardiovascular system: among these is hypertension.

Hypertension is defined when someone has blood pressure values greater than 140/90 mmHg. Both obesity and overweight are considered the most important environmental triggers of all those involved in the onset of hypertension.

Thus, it is calculated that for every 10 kg of weight gained an increase in blood pressure of about 2-3 mmHg occurs. However, the cardiovascular risk that obesity brings also has to do with where the fat is located. Thus, the most dangerous for the organism is located at the abdominal level.

On the other hand, it is necessary to take into account that in addition to hypertension. Overweight also predisposes to other pathologies such as diabetes and hypercholesterolemia. These last two diseases produce atherosclerosis. Which damages the vessels and further increases cardiovascular risk. 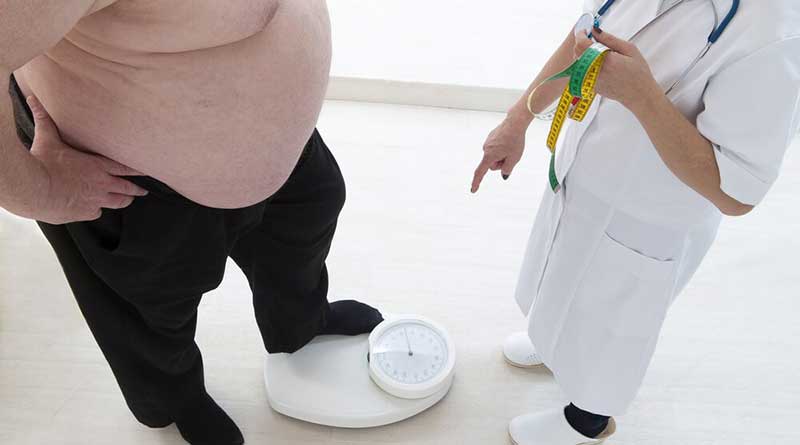 The following will explain the events that lead to develop hypertensionfrom overweight.

In the course of overweight there is an increase in adrenergic activity, ie, adrenaline. This leads to a multitude of events that, on the one hand, promote hypertension. And on the other hand, increase cardiovascular risk.

As a result of adrenaline, hypertensive mechanisms are carried out at the renal level. One of them is the reabsorption of sodium from the urine, which increases the blood pressure figures. The other is the secretion of renin, which is a hypertensive peptide.

On the other hand, adrenaline promotes platelet aggregation. This increases the risk of vascular accidents such as thrombosis or embolism.

In the course of hypertension, by a series of mechanisms at the renal level. The concentration of aldosterone increases. This, also at the renal level, results in a greater sodium reabsorption. As we have explained before, large amounts of sodium increase the blood pressure figures.

Measures to control overweight and hypertension

There are pharmacological and surgical treatments for the control of overweight and hypertension. However, the most effective are the so-called conservative measures. This term refers to those changes in the lifestyle aimed at correcting the disorder that is suffered.

Weight control is considered the cornerstone of the non-pharmacological treatment of hypertension. All people with hypertension and overweight should start a weight reduction program. This program should involve a reduction in caloric intake and an increase in physical activity.

Physical activity should be moderate and appropriate to the person’s age and possibilities. It is advisable to perform aerobic activities, that is, those of moderate intensity but that it is possible to maintain them for a considerable time. Examples of aerobic activities are swimming, running, walking, cycling…

These aerobic exercises are aimed at activating the cardiovascular mechanism of the organism. That is why the heart rate during them must be increased. In order to increase it a little more each time and get a healthier organism.